In her recent performance, Casting off my Womb, Australian feminist artist Casey Jenkins spent 28 days knitting from a ball of yarn that she held in her vagina. The piece attracted much attention on social media, and discussion found under hashtag #VaginalKnitting reveals that the work was both positively received, yet also controversial. Given the considerable feminist revolution that took place in the Western world in the 1960s and 1970s, it is surprising that such a performance still has the capacity to shock. Jenkins’ work participates in a long line of feminist performance and body art dating back to the 1960s, which coincided with the rise of feminism and the Civil Rights movement, during which great progress was made with regard to women’s rights and equality. Nevertheless, current discussion in the media regarding sexual assault on college campuses in the U.S., domestic violence and the NFL (National Football League), and “Lad Culture” in the U.K., indicates that feminism is still relevant in today’s society. So perhaps the reaction to Casting off my Womb isn’t that surprising after all. 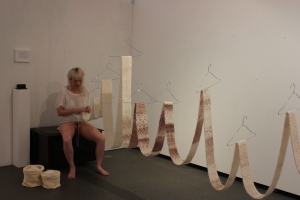 Feminist art, as a genre in its own right, developed in the 1970s: American artist Judy Chicago started the first Feminist Art Program at California State University in Fresno, California in 1970, and the Feminist Art Program at the California Institute of the Arts (together with Miriam Schapiro), the following year. Feminist art followed on from the political activity of the 1960s, which witnessed the women’s rights movement, the FDA approval of the combined oral contraceptive pill (1961) and the Equal Pay Act (1963), not to mention the eventual landmark decision by the U.S. Supreme Court regarding a woman’s right to privacy on the matter of abortion in Roe versus Wade in 1973. Feminist art was thus a consequence and continuation of the Civil Rights movements of the 1960s. Achieving equality (at least in name and in theory) in everyday life, women artists sought a similar goal in the realm of art, long dominated by male practitioners, and in many instances they utilized the new genre of performance art to make both an artistic and political statement.

There is a long tradition of feminist body art that Jenkins’ performance draws from. In 1965, Fluxus artist Shigeko Kubota performed Vagina Painting, in which she attempted to paint a picture with a paintbrush attached to her underpants, dipped in red paint – giving the impression that it was her vagina that was holding the brush and the marks were made by menstrual blood. The piece is in some ways a direct response to the reputation of the Abstract Expressionist artists as a boys’ club, as most of the well-known or successful artists of the group were male. Jackson Pollock, for example, created large, expansive canvases in his studio, while his wife, Lee Krasner, an artist in her own right, received less attention by the critics, creating smaller pieces in the space remaining for her work. Kubota references Pollock with the fact that she places the canvas on the floor, as Pollock did. Carolee Schneeman also utilized the female anatomy in her 1974 performance Interior Scroll, wherein she pulled a text from her vagina and read it to her audience, transforming it into a “site of knowledge,” as opposed to simply an anatomical element of the female body. 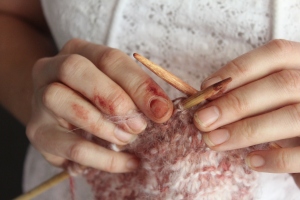 Jenkins said that she created Casting off my Womb to show the viewer that a vulva is “just a bit of a body…there is nothing that is shocking or scary…there’s nothing that’s going to run out and beat you up.” Since the artist did the performance over the course of a month, one part of it took place during her menstrual cycle. She carried on during this time, despite the fact that the blood eventually stained sections of the yarn. Consequently, the knitted piece she created bears traces of this aspect of her womanhood, and this is, I believe, a great source of the “disgust” on the part of some viewers – the fact that Jenkins makes this blood visible, instead of hiding it. The artist wanted to show that menstruation is not something to fear or disgusted by, but is a natural part of life. Similarly, as part of the 1970 Feminist Art Program in Fresno, a group of women artists created Womanhouse, which consisted of art installations, performances, and even consciousness raising sessions. One of those installations was Menstruation Bathroom, which featured stacks of sanitary napkins and soiled tampons in the actual bathroom of the house. The aim of this piece was similar to that of Jenkins. Yet considering the fact that menstruation and menstrual blood is still considered taboo, Jenkins addresses the continued need to tackle this subject.

While Jenkins continues the tradition of feminist body art exposing the female body and revealing its interior biology, she takes this exploration to the next level by merging body and material, interior and exterior. As she knits, the manufactured yarn becomes a natural material, and the body is both the producer and part of the final product. Whereas Schneemann removed a text from her body and read it, when Jenkins removes the yarn from her body it bears traces of her bodily fluids, which are the interwoven with the final knitted work. During the act of creation, Jenkins is both artist and object, creator and created, occupying both subject positions simultaneously. Furthermore, in this piece, the womb produces not life, but art, and woman is an active agent in its creation; the production of the artwork is not simply the result of a biological process. 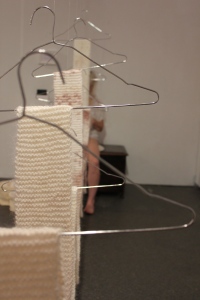 About her work, Jenkins said that she has the expectation that “when you’re showing the vulva… people are going to feel feelings of fear and repulsion.” Indeed, comments on Twitter ranged from “extremely disgusting” and “EW” to “uncomfortable” and “Tooweird.” The artist, however, created this performance in order to construct a different association with the female anatomy and its cycle: “by linking the vulva with something that people do find warm and fuzzy and benign and even boring… as knitting for a long period of time, I hope that people question the fears and the negative associations that they have with the vulva.” Quite often it is contemporary art, and especially performance, that presents shocking material, in order not to turn audiences away, but to force them to question their long-held beliefs. Eventually, what was once shocking becomes accepted and mainstream, however feminism and feminist art continues to shock and surprise.

The fact that the issues Jenkins touches on were taboo in the 1970s and remain taboo today speaks volumes with regard to the progress actually made since the women’s rights movement in the 1960s. It remains to be seen whether, decades from now, we will still see similar forms of female body art along the lines of Jenkins and Kubota, as women artists search for new ways of confronting the female body and its place in society. At least since the 19th century, artists have viewed art as a vehicle that could convey a message, modify ways of thinking, and – yes – change the world. Yet with regard to feminism, we still seem to have a ways to go. Perhaps it will take more vaginal performances and another fifty years.

One thought on “Casey Jenkins and Knitting Monologues”

This site uses Akismet to reduce spam. Learn how your comment data is processed.