By Amy Bryzgel and Fern Insh 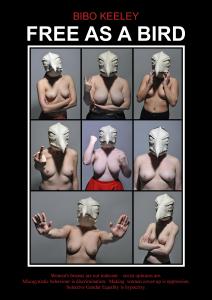 Bibo Keeley, “Free as a Bird,” Poster, 2015. Published with permission of the artist.

This is the statement that appears at the bottom of North East Scotland College (NESC) student Bibo Keeley’s mixed media work, Free as a Bird, which included text and staged photographs of several topless women, each wearing the mask of a bird, so that her face is not visible, and some of whom are making rude hand gestures: one has her arms crossed, another has her fist clenched and raised, while a third gives the viewer the middle finger—literally flips him or her the “bird.” But are these women free as a bird? The statement is no doubt ironic, as they are not free to reveal their faces, nor are we are free to see them. If their faces had been visible, perhaps the work would have garnered more controversy than it already received. Keeley submitted the work to be included in the NESC Creative Arts End of Year Show, however the text of the piece proved to be prophetic, as she was not allowed to exhibit it. However, it was not the women’s breasts were indecent, nor that they needed to be covered up, but the hand gestures, which made the image “inappropriate for the audience who [would] be attending” the show, according to a spokesperson for the college.

Keeley was given very little information regarding the decision to exclude the work. According to her, she was told that the issue was not the nudity, that was the problem, “but the way in which it was presented,” so she offered to cover the nipples of the women, and exchange other images for the ones with the rude hand gestures. The College refused her offer. As of August 11, 2015, an online poll conducted by Aberdeen’s Press and Journal revealed that 66% of respondents to the poll agree that the work of art shouldn’t be censored, because “it’s art, and freedom of expression is key,” whereas 23% thought that the issue was “blown out of proportion” and only 10% thought that there was “no need for that level of exposure,” and were perhaps offended by the nudity, or the gestures. If that was the judgment of the court of public opinion, then the “committee” that ruled to omit Keeley’s work from the exhibition clearly got it wrong. Perhaps they wanted a more polite, docile work, one less inappropriate—because those types of gestures certainly are not ladylike. 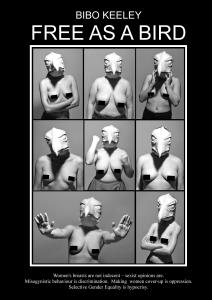 Bibo Keeley, “Free as a Bird,” poster (censored version), 2015. Published with permission of the artist.

As a work of art, Keeley’s image is perhaps not aesthetically pleasing, although that is subject to individual taste, and furthermore, that is not the point with the piece. The artist has called it a “feminist piece,” which means that the message is more important than the medium. The women in the poster look anything but free, but they are not submitting passively to their fate. Rather, they stand defiant, arms crossed, hands out in refusal of what they are being given; only one woman stands with her arms at her side, baldly starting (rather, the bird’s head stares) at the viewer. Although she doesn’t gesture, her firm stance perhaps provokes viewers to question themselves and where they stand on the issues being raised. Some of the women gesture rudely, but such a response to gender inequality is understandable—they are angry and fed up with the misogyny and selective gender inequality mentioned in the caption.

The second generation of feminism, which arose in the 1960s and 1970s, was accompanied by a new genre of feminist art in North America. Women artists began addressing women’s issues in their work, and came up with a range of solutions. Some focused on typical “women’s work,” such as needlepoint and crafts, and tried to raise it to the status of high art. Others touched on taboo subjects, such as menstruation and female sexuality. By the 1980s artists began to be frustrated that the second wave of feminism still had not achieved gender equality. The Guerrilla Girls was a group of feminist activist performance artists in North America who took to the streets to raise awareness about the discrepancy between the number of active women artists and those represented by museums. One of their famous posters reads: “Do women have to be naked to get into the Met. [Metropolitain] Museum? Less than 4% of the artists in the Modern Art sections are women, but 76% of the nudes are female” (italics theirs). The poster features a reclining nude, the body taken from French artist Jean-Auguste-Dominique Ingres’ La Grande Oladisque (1814), with the head of a gorilla. The Guerrilla Girls often appeared in public in gorilla masks themselves, creating flash mobs, and disturbances, in public spaces and at exhibition openings. Keeley’s work takes a strikingly similar approach—in her two-dimensional piece she combines text with an image of a masked woman; the sentiment, too, is comparable; these are all women who aim to be confrontational, belligerent, and perhaps just a bit offensive, too. They are not the docile women society expects, rather they are unpleasant—as unpleasant as the discrimination they face because of their gender. Like Keeley’s angry women, the Guerrilla Girls named themselves after their militant “guerrilla” tactics; there was nothing nice about them. They refused to sit demurely and accept the smaller piece of the pie that they were offered. Instead, they boldly “leaned in” and “took a seat at the table,” to quote feminist author and Facebook Chief Operating Officer, Sheryl Sandberg.

In terms of modern Scottish and British Feminist art, Keeley’s work builds upon a platform raised by eminent artists such as Jenny Saville, Kate Davis and Alison Watt. For example, Saville’s infamous quasi-self-portrait Branded depicts a realistic portrayal of the artist’s head on an enlarged and magnified version of her body. Words such as “support,” “petite” and “delicate,” terms alluding to an idealised female form, are carved into Saville’s epidermis in a flesh-like tone. The colouring of these words, blurring lines between real and imagined, provokes viewers to decide if the words are physically there, or if they are ‘mental scars’ carried by the artist when confronted by her own nakedness. The way in which Keeley merges bold words and images in a poster aesthetic is like a tribute to Saville’s piece. Keeley confronts the fact that the ideology behind the words branded on Saville’s body is still damaging to women. In Free as a Bird, she liberates females from the mental scars inflicted by convention; she emphatically states, in a bold format, that contemporary feminist artists have still not succeeded in changing outdated conventions regarding female nudity, not to mention what is considered appropriate feminine behaviour, in art, or in everyday life. Her frankness is necessary to combat the ridiculousness of everyday sexism. Saville’s self-portrait depicted a female as a victim, the women in Keeley’s original unedited version of Free as a Bird refused to be victims.

Keeley, too, refused to be victimized, choosing not to exhibit any work at all, rather than exhibit a different work in the show—a perhaps less offensive one. A spokeswoman for the College was quoted as saying that the lecturers choose the work for the exhibition “to ensure that what is shown is right for this particular exhibition, and for our audience…but this piece did raise concerns that it was not appropriate in the context of the show.” This begs the question: what is inappropriate about a feminist work of art in a modern, international and diverse city such as Aberdeen, in the context of an end of year show of an Arts College? One could think of no more appropriate place than right here, and right now.

5 thoughts on “Bibo Keeley and the Inappropriate Art of Feminism”

This site uses Akismet to reduce spam. Learn how your comment data is processed.